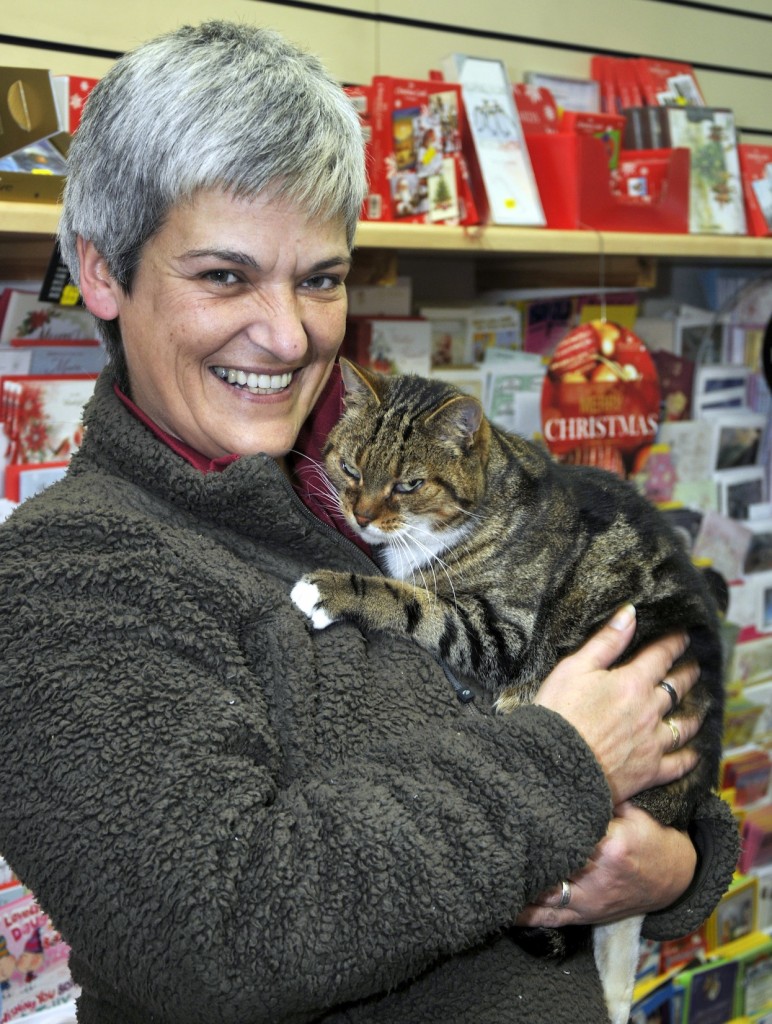 Hi everyone, this is Benson – Builth Wells Town’s Cat – Residents and visitors have probably seen her around over the last 18 years. Born in Osbournes Yard – we are told she escaped capture by the local cats home (her mother and siblings, all but herself & one other were captured and rehomed). Young Benson decided to make Builth Town her home. She was originally looked after at the pet shop Noah’s Ark by the then owner Ann Phillips.

When Gary Rollinson took over the pet shop, he also took over the care of Benson – Benson’s decision, we should add. Benson was also fed in the Parcel Office across the road. When Gary moved Noahs Ark up onto the High Street, Gary would go down to the top of The Strand, pick up Benson and take her up to his new shop in the mornings, returning her at closing at 5.30pm.

This was amusing as Benson was very soon visiting Conti’s newsagents when they opened at 5.30am, then she would leave Conti’s about 10 minutes to 9 and go to sit at the top of The Strand ready for Gary to come and collect her. This worked well until the Builth Fest Carnival 2012, when, once the parade came through with the band leading it, Benson shot out the shop and ran off.

She never really settled in the Pet shop after that, she would come out and dart across the road, when she started visiting Conti’s on a regular basis Gary moved her bed and food supply over there, worried she would dart out the shop one day and into the traffic.
Within a few weeks, Benson decided that the Flower Shop (which was next door at the time) was a quieter place to rest her head in the day. So come 9 o’clock when the Flower Shop opened she would head out of Conti’s and into the Flower Shop with Sue and Anita who welcomed her with a bowl of food and milk each morning, they were even leaving the back door open for her to get out at night. One thing had been established, Benson did not like to be shut in, it stressed her out terribly.

From the very early days when she was visiting Ann, on closing she would take herself back down to Osbournes Yard in The Strand, where she happily slept in the sheds and disused portacabin.
Sue later decided to move her Flower Shop over the road and and in this new location she was unable to leave the back door open at nights so she slowly discouraged herand Benson took up permanent day time residency at Conti’s Newsagents –  locals regularly donated funds to feed her and brought her blankets and treats.

She has been content there for 18 months now, and her fan base has followed her – customers often coming in just to check on her. She had a time where she happily slept on the chair (as seen in the picture), but she did used to get disgruntled at people petting her when she was asleep. Slowly a new area was made for her under a table where she can rest peacefully and come out when she wants her fuss – which she loves. She really likes her belly tickled, quite unusual for a cat.
As much as trying to put the papers out in the early hours is made difficult with Benson rolling around on them, insisting she is fed and needing attention, she has become a big part of the shop and is loved for her independent personality.
She came in as usual on Sunday the 24th November, had breakfast and said her usual greetings to the Sunday morning customers, all who have since said what good shape she seemed in that day. Julian put her out at closing time, 12.30pm and she went off on her way. She was then seen just after 1pm in The Strand by Emily Bujok where she enjoyed a bit of fuss. She had not been seen since…..so the local community joined forces, offering rewards, monies for any vet bills if she was found injured or ill – although Derw Veterinary Surgery has been fantastic in taking a look at him in the past and giving any needed medication or ointments, free of charge.

Everyone in the town wanted and needed to know what had happened to her. It was very unsual for her not to come home for food – and in the past 18 months it was unheard of for her not to be waiting at Conti’s door at 5.20am, we had hundreds of worried community members. Posters were put up, facebook posts were shared asking everyone to check gardens, sheds, coalbunkers, garages, cellars etc – we even had fans as far away as Canada get in touch because they were worried about her, slowly we began to face up to the fact she may have took herself off to die somewhere quietly. We also felt that if she had died, she needed to be buried somewhere safe away from any prey. The builders yard was searched top to bottom, the back of all the pubs – she often frequented these in the evenings, the Groe including hedgerows – basically every nook and cranny….all to no avail.

With the County Times all set to do a feature in the week aheads edition, to help find her, on Saturday 7th December Robert, owner of Nibblets saw her half way up The Strand, he walked down to her, gave her a fuss, when he tells us she began meowing. He then began to walk back up The Strand talking to her while she continued to meow all the way up to Conti’s, when reaching there she ran in the door and made herself at home again.

Happy to say the town has been buzzing for days, with people calling at Conti’s just to see her. It has been quite an emotional couple of weeks and there has been many tears of joy the past few days. She is in fine condition, has lost as little weight, but then she was a little on the over weight side. Where she has been, we doubt we will ever know. But where ever she has been we think she has shown the whole town, that the High Street is where she belongs, and for now it appears she is still choosing to visit Conti’s daily to get food, a nice sleep and a great load of fuss.  If only cats could talk….

The County Times reporter Ben, was more than happy to still run her story in the weeks edition.  On Monday Ted Edwards  www.midwalesphotography.com came along to the shop to take a few pictures of her, which we will publish later next week. Until then we took this one this morning. 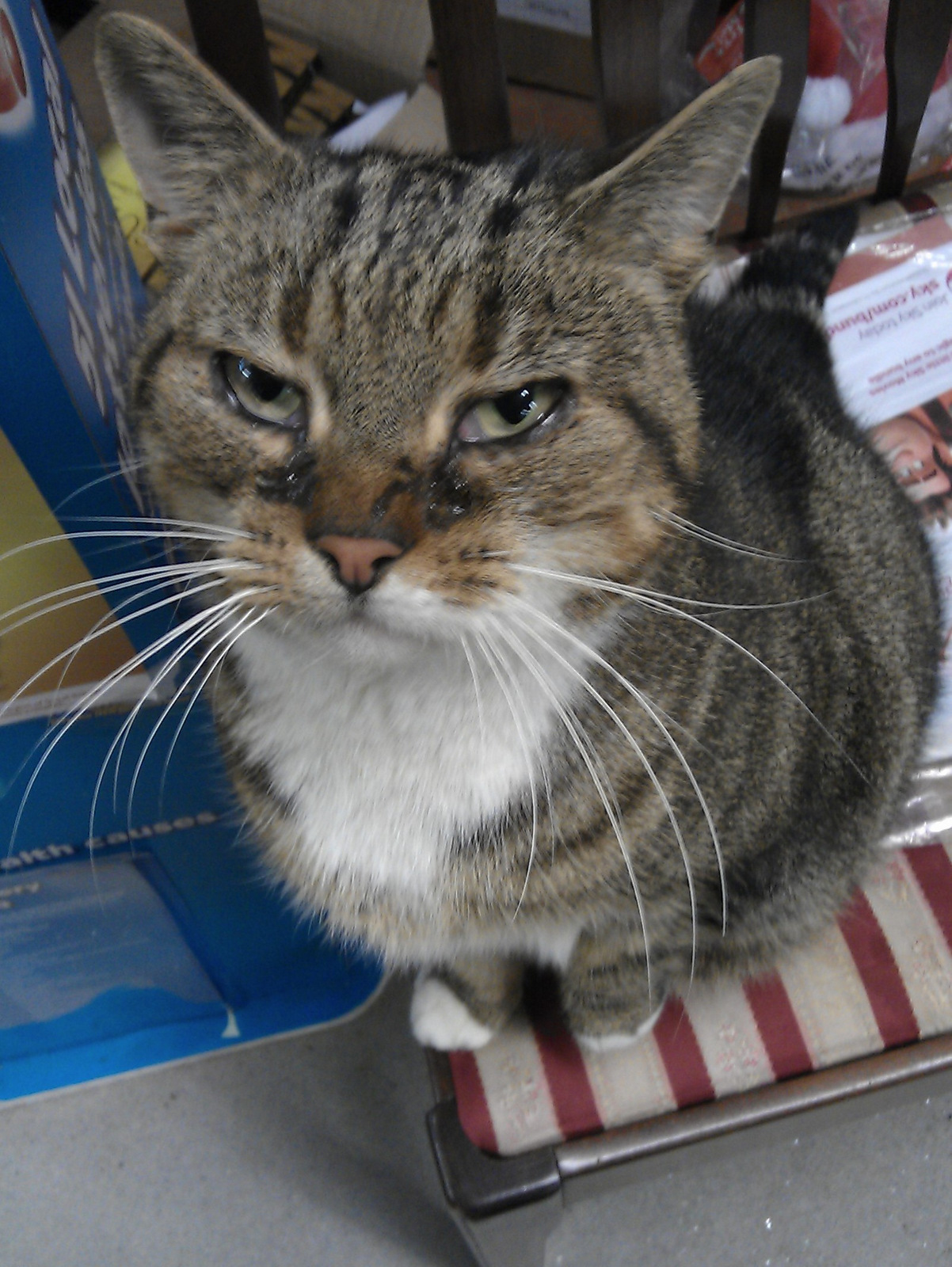 Benson back where she belongs