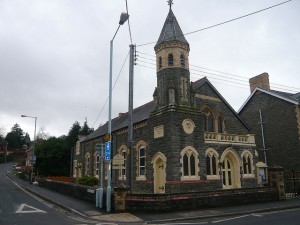 Wesley Church was originally built in 1804, on a site on the corner of the Hay Road and Castle Road, by the Methodist from the town, who following the teachings of John Wesley.

As Builth Wells and its visitors grew, it was decided a a much larger church was required and this new and still existing, semi Gothic style chapel, was built and opened in 1985 in Garth Road. It features a very prominent tower, bell-cote and spire.

Wesley Methodist Chapel is part of the Southern Area of the Shropshire and Marches Methodist Circuit.

Derek Long, who used be an FIEC minister, lives with his wife Rev Pauline Long in Knighton, where Pauline is Minister. Derek has been given care of Wesley Methodist Church in Builth Wells.